On October 17th 1989, the Loma Prieta earthquake shook San Francisco for 15 seconds, killing dozens in the Bay Area and causing an estimated $6 billion in damage. (It was the costliest disaster in US history at the time.)

One of the infrastructure elements seriously damaged by the earthquake was the Embarcadero Freeway, an elevated highway dating from the 1960s. Contentious from its very first days, the highway cut San Francisco off from its waterfront, yet was considered a critical arterial link to the Bay Bridge.

When the earthquake shut down the freeway, however, a remarkable thing was discovered: people could get around just fine without the elevated highway. In what would prove to be a defining element of the city's incredible regeneration in the years following the earthquake, San Francisco tore down the Embarcadero Freeway and replaced it with a mixed-use boulevard, relinking the downtown to the harbor.

While not despised in Brooklyn as much as the Embarcadero Freeway was in San Francisco, the intersection at Grand Army Plaza is still far from being popular. The Gordian Knot of an rotary is terrible to drive through, terrible to walk through, and terrible to bike through. If DOT Commissioner Iris Weinshall and the Bloomberg administration are as serious about changing New York's streets as they say they are, this would be an obvious place to start.

Despite its problems, Grand Army Plaza has a lot going for it. Straddling the border of Park Slope and Prospect Heights, it is the primary entrance to Prospect Park, Olmsted & Vaux's other New York City masterpiece. Every weekend when the park's drives are closed, the plaza hosts a wonderful farmer's market in its southern corner. The Soldiers' and Sailors' Arch, a towering icon honoring Union troops in the Civil War, sits near the Brooklyn Library.

Unfortunately, any chance of a pleasant experience when visiting on foot is obliterated by the absurd number of streets that intersect in Grand Army Plaza. Eastern Parkway, Union Street, Prospect Park West and Vanderbilt Avenue all terminate in Grand Army Plaza; Flatbush Avenue, the transportation aorta of Brooklyn, passes straight through. Five neighborhood streets and the Prospect Park Drives also enter the intersection, meaning that while some drivers are trying to shoot through at 45 miles an hour, others are looking for parking spots.

At the same time, two rail corridors pass directly beneath the site: the 2/3 and 4/5 trains on the old IRT right-of-way, and the B/Q trains on the BMT. Thus fixing Grand Army Plaza is a bit more complicated than tearing down the Embarcadero, and there's been no singular event to force the issue. Nonetheless, I think it is crucial for the long term cultural and economic vitality of the area that the plaza not only be reorganized, but fundamentally redesigned.

A noteworthy precedent can be found in Chicago. In the 1990s, Lake Shore Drive was rerouted to allow the construction of Museum Campus, a pedestrian plaza linking the Field Museum of Natural History, Shedd Aquarium, Solider Field and Northerly Island. The project created a new waterfront district virtually overnight. (Northerly Island, formerly the site of Meigs Field, became available in 2003, when Mayor Daley had the runways at Meigs Field ripped up -- with 16 airplanes still parked on-site.) 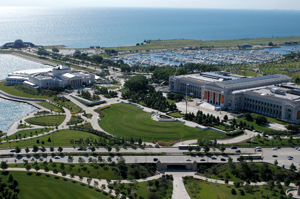 While changing the traffic pattern in Grand Army Plaza will certainly have an enormous effect on the borough's overall transportation network, it is the only way to reclaim the space for people. As the lessons of San Francisco and Chicago show, reducing the amount of automobile infrastructure and reclaiming land for pedestrians can have a dramatic and wonderful effect.

So how do you do it? Let's take another look at how things are now:

As with most photos on this blog, click the image for a link to its flickr page; you can then click 'All Sizes' for a larger view.

One of the biggest problems with Grand Army Plaza is that there's so much unused space -- remarkable, given the number of landmarks, streets, and residences in the area. A lot of the unused space is paved, such as the area between the arch and the fountain in the center of oval. Let's walk to the library!

Even more space is wasted on the raised berms that ring the interior oval. Originally designed to protect the residential buildings from bothersome traffic noise, these huge piles of dirt aren't even open for dog-walking. Given what I'm paying per square foot for my apartment nearby, this is absurd. Wouldn't it be a better solution to just get rid of some of the traffic rather than block the noise? Another problem is that high-speed traffic passing through the plaza is forced to mix with low-speed local traffic, creating confusion and disorder in a space that should be comfortable for pedestrians. Any potential change to the plaza must therefore:
As it turns out, I thought of something that might work...

Another homemade transportation plan. The subway routes are approximate.

The key to this plan is the construction of a shallow tunnel to the east of the subway lines that would link Eastern Parkway to Flatbush Avenue. Flatbush Avenue itself will still pass through the plaza, but with both directions of traffic on the same strip of pavement. The perimeter roadway will also still circle the plaza, but it will connect to Flatbush and Vanderbilt at just the northern corner of the plaza, ensuring that it is used for local traffic only.

This plan accomplishes all three goals: the arterial roads are kept apart from neighborhood roads by moving some traffic into a tunnel and the rest onto a single above-ground roadway. The pedestrian space is combined into two sections (as opposed to the five there are now), the larger of which links the Brooklyn Library to the central plaza and the sidewalks of Prospect Heights. With the fields of Prospect Park so close, I envision this space as more of a European-style plaza than a green space; perhaps something like the recently developed Oval Basin in Cardiff, U.K.

There will still be a couple messy points -- the intersection of Union Street and Prospect Park West will still be a bit tricky, for example -- but overall, I think it would be a dramatic improvement. The smaller of the two pedestrian spaces could be used to make the city's biggest dog run, a sculpture garden, or even developed with housing to finance the project. (Wouldn't the politics of that be fun?)

Flatbush Avenue would still cut the entrance of Prospect Park from the plaza, but I think a wide pedestrian bridge aligned with the opening of the arch could overcome that problem in a way that produced some incredible sight lines in both directions -- the sort of vista that Olmsted is famous for, but was never fully realized at this site. The spot in the middle of the plaza, though virtually inaccessible, is actually quite pleasant. It's also one of the most popular spots in Brooklyn for wedding photos.

The point I'm trying to make here is not that I know how Grand Army Plaza should be arranged, but that it needs to change. Despite my general wariness of new urban tunnels as a solution to urban planning problems, (see The T) in this case, I think tunnelling warrants some consideration: a relatively small tunnel could potentially make a huge difference.

In any case, Brooklyn is at a turning point in its history, and the city's leaders have an opportunity in Grand Army Plaza to make a bold statement: make yourself comfortable.

Glad to see some creative thinking about Grand Army- I often think about this while biking through it.

A couple problems with the tunnel, though. The sightlines for drivers entering the tunnel at either end are really bad in this configuration, which could just cause more congestion & accidents. But more generally, a tunnel portal at these two locations would be really devestating to the mission of making it easier to cross (just look at the pedestrian situation anywhere in NYC where there is a tunnel portal or bridge entrance).

I think that just dedicating traffic space in the center of the circle to flatbush ave N/S and eastern parkway traffic (which is a vast, vast majority of the cars) would be a good first step and would allow more space for pedestrians and more predictable pedestian crossing locations. All other traffic coming from or going to Vanderbilt, PPW, or Union St could go on the outside circle.

There was recently a similar discussion about this on curbed, and also coverage of the Danish city planner who has addressed this conundrum.

There are also some traffic solutions which could be considered. Forinstance, if PPW were to become a 2 way street from GAP to 9th St., this would take some northbound pressure off of Flatbush, just as permitting vehicular traffic through Prospect Park takes southbound pressure off of Flatbush in the PM. Also, Union St., which is one-way eastbound for a block or two near the Gowanus Canal, should have a one-way westbound block at some point to make it less of an express lane from Carroll Gardens to PPW (it only has one lane of traffic in either direction, unlike 9th St.). The tunnel is an interesting idea, but has to be looked at in a larger context of traffic patterns.

What about, instead of jusing the western road and a tunnel, just using bi-directional traffic on the eastern road? You'd need traffic lights for southbound left turnoffs at Plaza Street, Vanderbilt Ave, Eastern Parkway & Flatbush Ave (one light might suffice for both), and the final PPW/Union St split. And northbound traffic would all just merge in as the road sweeps around. Then the arch, the central oval and the western park could all be merged into a single pedestrian zone, opened up to Plaza St West, and connected to the park by your Bridge. PHeights residence could perhaps access the whole shebang via another pedestrian bridge over by Vanderbilt.

Actually, the berms were originally intended to protect the center of the Plaza from the street noise created by wagons and trolleys running along Plaza Street on the outside of the circle!

I was just browsing and came across your site, which I found really interesting. I am involved with the grannies united website and one of the things we are trying to get going is our "green granny" section at http://www.granniesunited.com/green-granny/ . I therefore just wondered if you or any of your contacts may wish to submit an article to the site (focused on the grandmother users). We are really pushing to make the planet better for our grandchildren,

If you don't then no problem and keep up the good sustainability work.