Last fall, I was walking through Prospect Heights when a residence caught my eye. The building was a fairly standard one -- a classic 3-story Brooklyn brownstone built, in this case, from brick. Rather, what caught my eye was its position: it was rotated about 60 degrees from the rest of the street grid. Buildings don't build themselves, and whoever built this one located it the way they did for a reason. Especially in brownstone Brooklyn, where rowhouses are the dominant architectural feature, buildings usually face the street. In this case, either someone decided to build it differently or the street it once faced no longer existed. Stepping back, I noticed that the building next door, which appeared to have been built more recently, was angled like its neighbor despite a corner that fit the existing street layout. Moreover, a new building under construction was also similarly rotated -- clearly the plots of land in this area were oriented towards some feature of the urban landscape that's no longer there. 323 Prospect Place in the red box. Viewed from above, it seems that a whole block has been dropped from a different street grid into that of Prospect Heights. Why?

My initial hypothesis involved Brooklyn's longest and oldest street: Flatbush Avenue. The road that is now Flatbush Avenue was originally the southernmost section of an ancient Native American path. Broadway, in Manhattan, also follows part of this path, which reached as far north as Albany.

I thought that before Brooklyn evolved into its present layout, maybe Flatbush Avenue had been further north -- perhaps this block was oriented to face the old right-of-way. Yet as I examined old maps like the one below, I found that the road had changed remarkably little over time. My next theory was influenced by the High Line, an abandoned freight line on Manhattan's West Side. At the turn of the century, the Vanderbilt railyard (now better known as the Atlantic Yards) was ringed by Brooklyn's meatpacking industry. To facilitate the movement and loading of freight, the Armour Packing company built an elevated freight line to cross Atlantic Avenue. 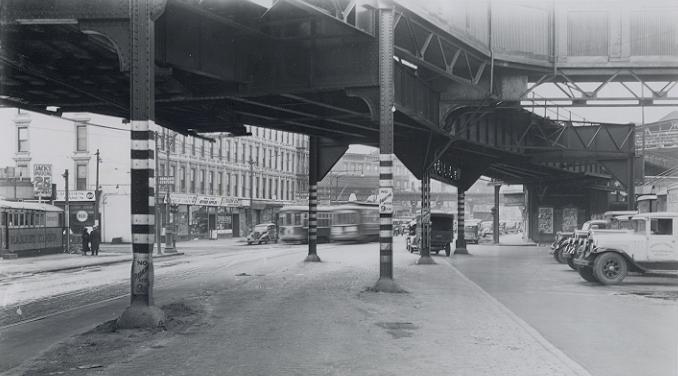 Unfortunately, I could not find any information on where the freight line went after it crossed Atlantic Avenue. Perhaps, I imagined, the freight line cut through what is now the residential neighborhood of Prospect Heights. Perhaps there was a turning loop at the corner of Prospect and Underhill -- this would explain both the park at the corner and 323 Prospect Place! Sadly, there is no evidence of this whatsoever -- my best guess now is that the elevated line ended not far from where it started: near the yards.

For several months, I gave up on explaining the unusual placement of the 323 Prospect Place. Then several weeks ago, a reader wrote me asking about the original shoreline of Manhattan. (I love reader e-mails, by the way.) I e-mailed her the link for the Brooklyn Genealogy Information Page, which also has maps of the other boroughs. I found myself poking around old maps again, but this time I saw something I hadn't noticed before. On an 1866 map, there was a street that doesn't exist today. Most likely, the street didn't exist yet in 1866 either, but the fact that it was mapped gave me an idea. I realized that the area was probably redesigned by Olmstead and Vaux as they planned Prospect Park and Grand Army Plaza -- perhaps this would explain 323 Prospect Place.

Unfortunately, the 'mini-plaza' mapped to the north of Grand Army Plaza is still a block from where the rotated building sits. Indeed, even if the buildings were built according to the abandoned Olmstead and Vaux plan, there's no explanation as to why they'd be at such an angle.

Maps from before the planning of Prospect Park show a grid of streets continuing east -- later maps show the same. Yet in the 1860s and 1870s, the plan for the area underwent several changes. An early plan for Prospect Park by Egbert Viele, chief engineer of Central Park, called for the park to extend as far north as Warren Street. (Prospect Street today.) According to this plan, 323 Prospect could have had faced Prospect Park. (Yet it wasn't built that way...) After the Civil War, Olmstead and Vaux were commissioned to redesign the park -- it is their initial design on the 1866 Johnson Map. Yet theirs was not the final plan. The reservoir was replaced by the Brooklyn Museum and Eastern Parkway was cut through though area.

I have yet to find a concrete explanation of why 323 Prospect Place is oriented the way it is. Part of me, I think, hopes I never figure it out. Just the same, I'll keep trying.

NOTE: An newer version of this post (with new revelations) can be found at Lost Magazine.

when was the house built?

According to NYC tax data, the house was built in 1905. The tax data, which is usually accurate but far from perfect, has the wrong address for the house -- 321 instead of 323 -- which makes me question its validity a bit.

Based on its appearance, I would have thought it was older... Thus I'm not exactly sure when it was built.

I would guess the rectangle that can be made out was a early factory in the area.

I happened to be doing research at the Brooklyn Collection today, so I pulled the atlases and checked out these parcels. That entire area was originally (c. 1840s) a farm owned by one Nehemiah Denton. That parcel was generallly oriented perpendicular to Washington Avenue. Denton had sold it to James Underhill by the time the 1874 Farm Map was published. In an 1886 atlas the area had been partially subdivided, with a large plot to the west of the area in question still in the posession of one Wm. Laight, who was forced to sell it in 1897 after a lawsuit.
Anyway, I speculate that when the land was subdivided in the 1880s it was done so in stages, with that on Washington (the edge of the property) sold first. Lawsuits or deaths intervened, and the land was left in smaller parcels that didn't conform well to the grid, and someone made the best of a bad situation.

The park across the street was a pumping station by 1916. (There was a reservoir at Eastern Pkwy and Vanderbilt)

I think your initial hypothesis was correct. The old lot lines were oriented to the Flatbush Turnpike, which worked its way south slightly east of the current extension's route. The house in question and the two old farmhouses behind it are built within the old lot lines. This sort of thing is prevalent in Pro Ho. If you go to Frannys for a pizza, notice the rear corner of their backyard. Across from Freddys on Sixth Avenue is another example.
This old map from the NYPL illustrates my theory with both the current grid and the original lot lines.
http://www.flickr.com/photos/79315049@N00/83919145/in/set-1541182/

I think your initial hypothesis was correct. The old lot lines were oriented to the Flatbush Turnpike, which worked its way south slightly east of the current extension's route. The house in question and the two old farmhouses behind it are built within the old lot lines. This sort of thing is prevalent in Pro Ho. If you go to Frannys for a pizza, notice the rear corner of their backyard. Across from Freddys on Sixth Avenue is another example.
This old map from the NYPL illustrates my theory with both the current grid and the original lot lines.
http://www.flickr.com/photos/79315049@N00/83919145/in/set-1541182/

btw, it's not just that block where the old, Flatbush Turnpike-influenced lot lines prevail. It's also true on the two blocks to the north, between it and Dean St. (a couple of lots just on the other side of Underhill.) toggle between flickr map with this map:
http://tinyurl.com/2l5bf2

i don't see the connection to the freddy's lot, though.

The Beckers Aniline & Chemical Works, one of the early producers of dyestuffs in the US, was located at 107-113 Underhill Avenue in 1912. The manufacturing site likely covered an acre or two bounded on the south by the corner of Underhill and Prospect. The site probably included the brick building at 323 Prospect Place since it was existing from 1905. The Beckers Aniline plant was wrecked by an explosion in 1914 that killed two chemists.

William G. Beckers then moved the operation to Ditmas Avenue near Canarsie which was much less populated at the time. He made a fortune in the dyestuff industry and retired at a young age in 1920 to a palatial 40 room estate in Lake George, NY.