Been thinking a lot about the sale of Stuyvesant Town. Stuy town is pretty fascinating place. When it was built, it marked one of the first attempts in America to develop 'towers in the park,' an urban vision inspired by the designs of Le Corbusier. (Corbu, as the cool kids call him.)

This is a plan Corbusier made for the development of Paris. (Orientalarchitecture.com has an amazing photo of Corbu's vision realized more recently in North Korea.)

When the Federal Housing Act of 1949 rolled around and freed up huge amounts of federal dollars for urban renewal, the recently completed stuy town (opened 1947) stood as the primary example of a large scale working-class housing development in the country. Its influence is at least partially responsible for why America's cities are now filled with high-rise public housing projects instead of low-rise public housing projects.

One thing that irks me about the discussion of the stuy town sale is that it doesn't seem like anyone's considered subdividing it. Everyone's hooting and hollering about the $5 billion price tag -- the largest real estate deal in the history of the United States -- and no one's discussing whether people renting in the buildings might be better served if some smaller companies could get involved with the bidding. $5 billion is a lot of money, only the very biggest real estate companies will have the capacity to bid at all. 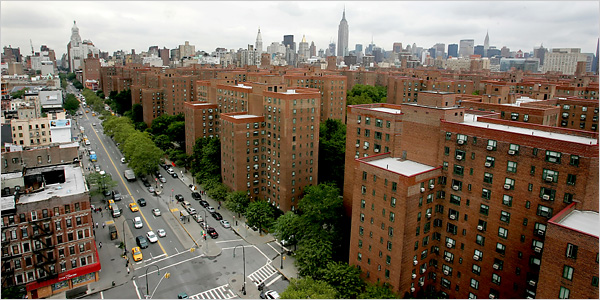 All the discussion of low-income housing that the stuy town sale has stirred up also got me thinking about the state of affordable housing in New York City. It deserves its own blog post at some point so I won't get into it here, but I will say that I think there are many facets of the system which could use some tweaking. The money spent on subsidising housing in Manhattan could be used to subsidise housing in other boroughs AND pay for education. A better education system would probably reduce the need for housing subsidies in the long term... More on that at some point in the future.

"The money spent on subsidising housing in Manhattan could be used to subsidise housing in other boroughs AND pay for education. A better education system would probably reduce the need for housing subsidies in the long term..."

slightly idealist, but talk about a breath of fresh air. i'm glad there are people thinking this way. i also agree with your view on how it was being sold as a whole rather than dispersing it amongst smaller companies - although i think we both know that the bigger companies who can afford it want to keep things the way they are: for themselves.