I just came across this visionary redesign of the New York subway map on Gothamist and wanted to share it with everyone.

Kick Design's new subway map is a dramatic simplification of the existing design. More about the Kick Map in the NY Times.

I haven't been able to contribute much new writing to the Built Environment Blog recently, but that shouldn't suggest there hasn't been a lot going on. Earlier this month, for instance, Chicago was selected as the USOC's bid city for the 2016 Olympics.

Apparently the Hancock has displaced the Sears Tower as Chicago's most recognizable skyscraper.

Based on my experience with the NYC2012 bid, I thought that any US bid for the 2016 Games would have trouble defeating Buenos Aires. (There's never been an Olympics in South America.) As it turns out, however, Buenos Aires isn't even going for 2016. "Madrid, Prague, Rio de Janeiro, Rome and Tokyo are expected to be in the mix," says the NY Times. Though it is a South American city, Rio lacks many of Buenos Aires' strengths as a bid city, and all the other cities have issues as well. I think Chicago could really win this. 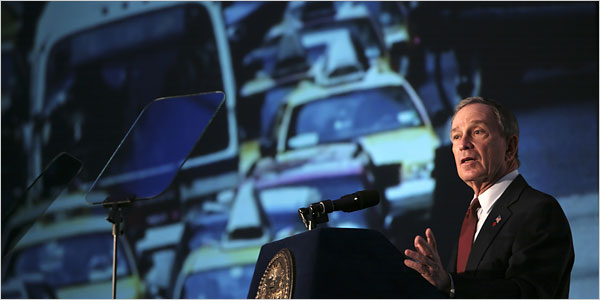 In other news, Mayor Bloomberg just released the PlaNYC 2030 report, a sweeping vision for New York City's future. It's an ambitious and controversial plan that the NY Times calls "an agenda that in some ways resembles the Olympic plan in a green dress." Indeed, there were several key players involved with both efforts. I'm thrilled that the plan has been released, but the initiatives need a powerful political force behind them. Much of the work lies ahead.

I hope to be writing for the blog again soon, perhaps on the 2016 Olympics or on the planning of New York City. In the meantime, feel free to check out Libraries that Matter, an article I helped write for PPS's Libraries and Civic Centers newsletter.

As someone who lives in Buenos Aires (and loves it), I just can't imagine the city actually getting organized enough to host an Olympics. There seems to be diverging opinions among city planners about where the city is going and a lot of projects just don't get off the ground. I read over the proposal for the 2004 Olympics in BA and wasn't that impressed.

Also, Argentina's economy is still very unstable. While the economy is growing, some people are predicting another economic collapse within ten years since the government isn't addressing long-term economic issues. I think those things played into the decision for Buenos Aires not to seek a 2016 bid.

Good to see you back in the saddle. Go Chicago!!!